As You Feed Maui Fish From Your Yacht In The Lahaina Small Boat Harbor:
Count Your Blessings.
And Your Fecal Coliforms

Many who feed Maui fish, such as Maui Yacht Club Sailers, have got their stuff together. And that's the problem. Flushing the Lahaina Harbor may be the solution.

A plan to flush filth from the Lahaina small boat harbor is being considered by State harbor officials.

The plan calls for temporary dismantling of the rock breakwater near the southern bend, and the underwater installation of three 40-foot long culverts.

Through these three-foot diameter culverts, the water could circulate north towards the existing harbor entrance, flushing harbor impurities out to sea.

The idea was developed by Lahaina Harbormaster David Hudson, who felt "there is no excuse to have dead water in the harbor, with all the energy of the ocean right outside."

Hudson proposed the idea in February to Capt. P.A. Lilly, State Harbormaster for Maui. Lilly endoursed the plan and forwarded it to Honolulu officials.

Guy Chu, assistant chief of harbors for engineering from Honolulu, gave Wailuku engineer Norman Saito the go-ahead to conduct surveys and submit a fee proposal for the job. No cost estimate has yet been anounced.

Jack Seaburn, owner of the ketch Moonglow, felt the idea was a good one. "I've seen feces floating in the area directly in front of the cannons," he said. "Sometimes this material floats out into the middle of the harbor."

Seaburn said the harbor water contains a staph infection. "Everyone here has it. I got it in a cut and three days later I was in the hospital," he said.

Hudson said the harbor has 92 berths, all occupied. He estimated some 500 persons use the harbor on any given day. Some feed Maui fish.

"Some young guys go swimming," he said, "but no one in their right mind." 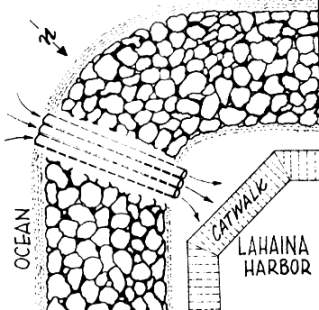 Tim Prior, new Maui County environmental health specialist, said he did not definitely know the reasons for the high fecal coliform counts. Prior took over the job earlier this month.

Prior said that the readings can be expected to vary and that tide and currents will affect the bacteriological count. He also said that a boat toilet might have been used and flushed into the harbor prior to testing.

The waters within the small boat harbor are classified as Class B, according to Prior. He said this classification includes areas in which small boats, commercial ships, industry, and bait-fishing boats operate.

One of the requirements of Class B water, he said, is that the water contain an average of no more than 400 fecal coliforms per 100 millimeters of water over a 30-day period. The average may be obtained from any number of samples.

A single reading for the month of January showed l,100 fecal coliforms. During February two samples were taken, and they were rated at 930 and 23. Readings for March showed 230 and 43. One sample taken in April showed just over six. No results have yet been obtained for May.

Prior said a year-long series of sampling tests would have to be carried out before the health department could positively say an area is polluted.