Here The Lahaina Sun gets by with a little help from our friends.  Tim Mitchell kindly wrote the story which follows.  Published in 1972, this is the story of Hale Pai.  Tim will explain the Hawaii printing saga.

This Friday, Jan. 7, marks the 150th anniversary of printing in Hawaii.  To mark the event, the public is invited to an open house from 10 a.m.-4 p.m. at Hale Pa'i, the House of Printing, at Lahainaluna High School in the hills above Lahaina.)

The first company of missionaries who disembarked at Honolulu in 1820 were selected by the American Board of Commissioners for Foreign Missions to be a self-sustaining community.  Among them, they counted a farmer, a mechanic, a physician and a printer, the latter being 19-year-old Elisha Loomis, who brought with him a second-hand Ramage Press and several fonts of type.

For nearly two years, the group concentrated on learning the Hawaiian language and adapting the English alphabet to the native sounds.  On Jan. 7, 1822, Loomis printed the first pages of an Hawaiian spelling book.  The mission press at Honolulu had begun. 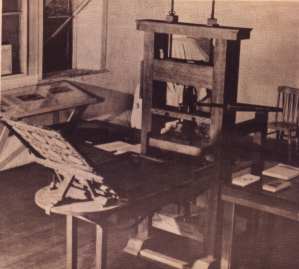 A second Ramage Press was added in 1828, and in May of 1832, a printer was sent with a third press and sufficient equipment for a second printing office at one of the neighbor island stations.  For over a year and a half, the site of the second Hawaiian printing office was debated at Honolulu.

In their report to the Honolulu mission in June, 1833, the Directors of the Mission Seminary at Lahainaluna bemoaned the lack of textbooks, and recomended that "one of the Ramage Presses now at the office (Honolulu) be sent to the High School..." 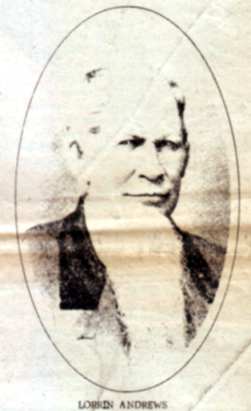 This argument, and the fact that Lorrin Andrews, first principal of Lahainaluna, claimed some knowledge of printing, convinced the General Meeting of June, 1833, to establish the second Hawaiian printshop at Lahainaluna.

In August of that year, construction began on a building to house the Hawaiian printing press.  The old Ramage Press arrived in December, and in January the temporary house was ready to receive the press.

A native printer from Oahu arrived to set up the press, and soon the workshop was in business.

"The first book put to press was a translation of Worcester's Scripture Geography, Andrews reported.  "On the third of February (1834) the first sheet of the Geography was worked off.  We soon found our press to be a poor one.  Our types were also of two different kinds mixed together, some longer than others and which we did not know until the experiment taught us.  By separating, however, we made better work afterwards..."

Andrews' students took an immediate interest in Hawaii printing processes, and they were allowed to work in the printing office.  But for Andrews, running the hawaii printing office was not without its headaches, and his own admittedly "limited knowledge" of the trade proved even more limited.

As early as 1829, the missionaries at the Honolulu Station had discussed the pros and cons of publishing a newspaper for themselves and the native Hawaiians.  Andrews strongly opposed any newspaper, primarily on the grounds that the time was not ripe for this type of communication.

"The idea of a part being in English does not strike me favorably.  What do the natives want of English?  What do we want of it except to send to our friends?  I do not know what exalted ideas it would give the people of New England of our wisdom, judiciousness, etc., but I am sure in the Western States they would laugh at it. Whereas, if we confine it to the Native language, they may laugh but they would not know what at."

Even though Andrews was opposed to a newspaper which would be largly self-serving to his New England brethren, he recognized the potential of hawaiian printing as a teaching aid.  On Feb. 14, 1834, the press at Lahainaluna printed the first edition of Ka Lama Hawaii, the Hawaiian Luminary.

The four-pager had the distinction of being not only the first newspaper published in the Hawaiian Islands, but the first one west of the Rocky Mountains.  It was to be two more years before the island had a commercial paper for the English-speaking community.

Unfortunately, Ka Lama Hawaii was short-lived.  The great demand for books, and the time and efforts necessary for their production, won out.  With reluctance, the newspaper was discontinued in December of 1834.

At the General Meeting in 1835, E.H.Rogers was assigned to Lahainaluna  to take over the printing office.  With Rogers' arrival, thought was also given to constructing a larger and more permanant home for the printing office, but it would be more that 18 months before construction began on the present Hale Pa'i, in January 1837.

No sooner had construction began on Hale Pa'i than the missionaries at Oahu seemed to have second thoughts about the need for an elaborate printing office at Lahainaluna.  Also, the recession which hit the United States contributed to bringing the work to a grinding hault.  In June of 1837, the American Board advised the mission to retrench and spend only half of the funds budgeted for the coming year.<b>(Above left, Hale Pa'i in the 70's)</b>

The Maui mission would not give up.  A special meeting was called on Aug. 30, 1837, in the Seamen's Reading Room in Lahaina, of the missionaries of the windward islands, and it was agreed "...that the sum of $100 be appropriated to finishing the printing office at Lahainaluna so far as to be completed."

Hale Pa'i was finished and the hawaii printing work went on.

Andrews left Lahainaluna in 1844, and hawaii printing and engraving declined until they ceased altogether in 1847.

To Go To Lahaina Library-Click Here

To Go To Newspaper Update-Click Here

To Go To Hawaiian Words-Click Here 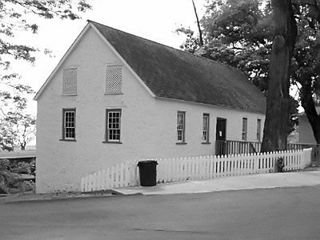 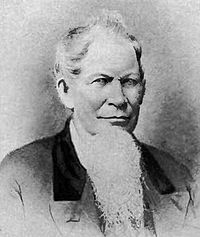