Alchemy And Magic:
The Fine And Fancy Art Of Tie Dyeing 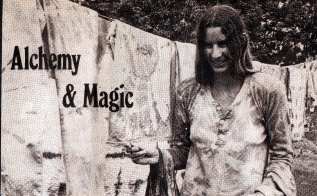 "A form of Alchemy.  Magic.  A personal trip which anyone can do."

This is tie dyeing to Lynn Taylor of Kula.

For the rest of us, a less esthetic definition might be the process of folding, tying and dyeing clothes.  The end product being an explosion of color.  Of circles.  Of squares.  Of triangles.  Of lines and blobs.

Standing beside her ironing board, Lynn pulls her rainbow slips, sheets, shirts, pants, sashes, socks, pillow cases and draperies out of an old box, commenting on the relative merits of each.  She finds cotton and silk to take the tyes most effectively.  And her white Levi's provide an excellent working material.  Oddly enough she has had much success with Rayon which is not supposed to do well at all.

"Tie dyeing is great for people who don't like ironing.  I never used to.  But now when I iron I just lock in on all the colors and patterns.  Here, look at this.  See the swirls and squares.  The blending of colors.  I can become engrossed with this for hours."

"I guess it was John Sebastian who started the whole group of us dyeing.  He has an amazing color sense.  It's so far out to see him enter the room.  He's so alive with color."

"So I became interested and began experimenting.  And picked up a bit from different people as I went along."

"Ann Thomas, better known as Tie Dye Annie, was one of the people I learned from.  She has since become a noted figure of the underground, dyeing the clothes of practically all the well-known rock groups.  Annie, herself, is now on the Big Island and should be visiting Maui soon.  I hope so."

Moving from the ironing board, Lynn sits down to fold the cloth.

"You know there are no mistakes.  If you don't come up with something you like the first time, it's easy to dye the material again.  Any number of times.  And often the mistakes you make turn out to be the most interesting designs."

Sitting in a corner of her mountain cabin, flanked by three-foot balloons of pillows, she gathers a pinch of garment and binds it with rubber bands, until an octopus-looking affair has materialized.  When each of the projections are dipped in dye and the rubber bands removed, the cloth will be a riot of concentric circles.

Next, she lays out a pillow case, and folds it as you would a flag, only reversing the folds so that the seams are exposed.  After the usual rubber bands, the case will be set in four dyes, one to a side.  A geometric pattern will result.

With a sheet, she folds one end over several inches, gathers this material and folds it under itself, then over again.  The narrow strip of material resembles a ruler.  Then she starts at one end and continues the process until left with a square.  This is bound and dyed as above. 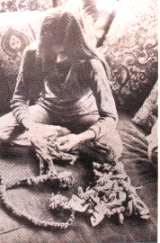 Lynn (left) is not geared to a deadline, mass-production schedule.  Originally she dyed things only for her friends.  After a couple of years, people began asking for them in stores.  So she started selling them on a limited basis.  Her first outlets in Hawaii were Project Three in Hilo and Jean's Fate on Oahu.  At the present time she is selling exclusively at Incite on Front St. in Lahaina.

"Personal instruction isn't mandatory to learn tie dyeing.  Like playing a guitar, you go along finding your own form of expression, picking up ideas from others."

"Instruction really isn't necessary.  There are several books in the library on the folding, tieing and dyeing.  Anyone can do it.

"I suggest beginners pick up a copy of the Whole Earth Catalogue to order their dyes.  It's available at the Either/Or Bookstore in Lahaina, and also at the Kahului Library.

"Start with something small, like pillowcases.  But watch it.  It's addictive and may lead to more dangerous things-like Batik."

To Go To Bad Beards On Maui-Click Here

To Go To Christmas-Click Here

To Go To Jerome-Click Here