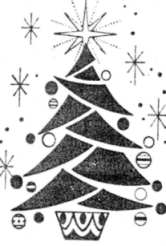 The first Christmas celebration in Hawaii was held aboard the English sailing ship Queen Charlotte in 1786.  The ship's captain, George Dixon, was not one to overlook the traditional occasion, even with limited fare.

On that first celebration in Hawaii, according to one account, Captain Dixon concocted a holiday punch by mixing the men's ration of rum with coconut juice.  From shore a pig was taken aboard and sea-pie was made to round out the festive dinner.

The place was Waimea Bay on the southwest coast of Kauai, of the then Sandwitch Islands.

Not far from the Queen Charlotte was His Majesty's ship King George, under the helm of Captain Nathaniel Portlock.  Ashore on  the Eve of the day, he had given out trinkets to women and children.  On the day itself, a Hawaiian delivered aboard the King George some hogs and vegetables.  In return, Portlock gave the native a gift.


Thus it was that the first Christmas was marked in Hawaii.  But it was 76 years later, however, before the holiday was adopted officially in Hawaii.

Because it wasn't mentioned in the Bible, the missionaries left that holiday custom behind in New England.  But the tradition is hard to toss aside, and bits and pieces of the celebration popped up from year to year until in 1856, King Kamehameha IV, remembering good times  in England, proclaimed Dec. 25th as a national day of Thanksgiving.

This skirted the Puritans' objections to such a celebration per se and was received enthusiastically by all.

Six years later a mission of the Church of England was established in Honolulu, the result of requests from King Kamehameha IV.  After being confirmed by the bishop, the king decided that the church's holy festival at Christmas should be officially proclaimed and observed.  And so it was, in 1862.

Since then, part of the tradition that has developed over the years is the arrival of Santa Claus.  Whether he comes by sleigh, helicopter, or surfboard, as far as Hawaii's children are concerned, Santa can come any way he wants, just as long as he comes.

Trees are as important to this holiday event in Hawaii as elsewhere.  Well over 100,000 trees of various types (Douglas, Spruce, Silver Tip, etc.) arrive by ship and air in the 50th State.  In reverse, about 10,000 Norfolk pine trees are sent from Hawaii to the mainland, with the demand for this ornamental tree increasing annually.

Wreathes of holly Hawaiian style give every appearance of the familiar English holly.  But the substitute greenery used here is actually foliage of the macadamia tree, from which comes the luscious nut that is a year-round treat.

Musically, Hawaii's  carols are the familiar melodies of the season.  A few Hawaiian carols have been added, and the phrase Mele Kalikimaka is as familiar as its English meaning, Merry Christmas.

The Xmas tradition in Hawaii has developed considerably since the two English sea captains recorded the first  celebrations in the islands, nearly 200 years ago.

This story-by Linda Boyes-was published in The Lahaina Sun in 1971. 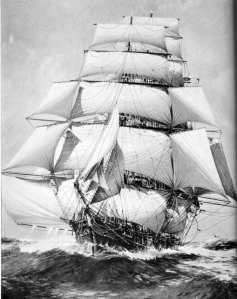 To Return From Christmas To The Maui Of Yore-Click Here

To Go To Sacrificial Temple-Click Here

To Go To Hawaiian Words-Click Here

To Go To Maui Beaches-Click Here