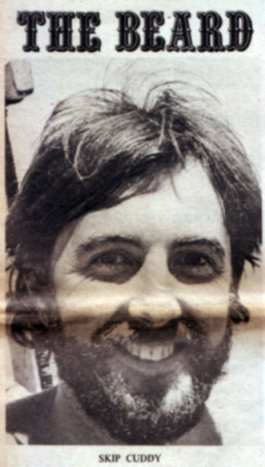 If you have a beard, don't bother trying to get a job in most of the restaurants in Lahaina and Kaanapali.

They don't want you.

Neatly trimmed or not, a beard is taboo.

Bad beards on Maui will not be tollerated.

Skip Cuddy of Lahaina found this out last month when he was fired from his busboy job at the Pioneer Inn for growing a beard.

Investigation by the Sun indicates the Pioneer Inn is not alone in turning thumbs down on bearded waiters and busboys.

Most major restaurants and dining rooms appear to have a policy against beards.

In most cases, the reason is the same: customers may not like it.

Cuddy said he went to work at the Pioneer last March. About five weeks later, he began growing a beard. He was permitted to keep it until about the middle of June, when manager Mike Stevenson told him to shave or leave.

And that was that.

According to Stevenson, Cuddy wasn't fired. He chose to keep his beard, so he quit.

Stevenson was one of several west Maui restaurant and hotel officials who claimed bearded employees can hurt business. Raymond Rushlight of Buzz's restaurant's said his company does not have a hard policy on beards, but indicated it would not be easy for a bearded man to get a job as waiter or busboy.

The Spencecliff restaurants (Pioneer Inn and Lahaina Broiler) and the Buzz's restaurants appear to have the most liberal policies for hairy employees, of the major eating places.

A large percentage of the young men working at these restaurants sport relatively long hair, and many have mustaches and long sideburns. But, in most cases, the line is drawn at full beards.

Ed Davis, manager of the Sheraton Maui hotel, said the hotel has a policy against full beards on its dining room employees. He said patrons would object.

Afterthought: When the bearded busboy kisses the salad girl in the stockroom-this may, indeed, be construed as a tickelish issue.