The Banana Patch -- organic, biodegradable soil suitable for the growing of counter-culture – is being harvested by the County of Maui.

That political body -- acting through the County Attorney's Office -- is gathering its grim reapers in the form of 33 violations of the building codes, land use laws, housing codes and health regulations.

The crop, some 50 longhairs, is expected to be plucked from the Patch August 1.

But they will be leaving voluntarily--more or less.

The story actually begins some five years ago when David Joseph, now 64, owner of the Patch, began to allow all comers to live on his land and build their dwellings according to taste.

There were only two rules: don't touch the bananas and don't strike your brothers.

About two years ago, according to one Patch resident, the County Attorney's office began to crack down on the area with every law in the book. This was done, he said, because they "hate hippies and want all the transients off the island".

County Attorney Kase Higa said "we do not want these people violating the law." He indicated that was the only reason for a long court battle, during which the County has accused Joseph of violating a wide variety of County housing and health ordinances. Higa said he was reluctant to speak about the matter because it is a pending court case.

According to an article written by Maui Bureau Chief Robert McCabe of the Honolulu Star-Bulletin:

"The County Attorney's office said Joseph was given the opportunity to comply with regulations and Joseph sought to show that the shacks were exempt from the codes because they were built in a farm zone.

"He took an adamant stand, positive that he was 'doing a good thing,' and his lawyers argued during several hearings in Second Circuit Court that the County was acting against the Banana Patch because it disliked the inhabitants.

"After almost two years of fighting the County, Joseph apparently has given in. But he blames his attorneys, Sandy Langa and Phil Lowenthal, for his capitulation. 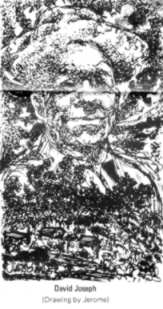 "They told me not to fight. I wouldn't mind fighting for the next 10 years. I know I'm right. They are falling down. They are trying to make a deal.”

"The deal, Joseph disclosed, involves the dropping of all charges against him if he tears down the Patch homes."

Attorney Langa and law partner Bill Kohne, who have been handling the case, were reluctant to speak about it.

Kohne said it's a case of "having to do what's best for your client".

Langa described the situation -as "still pretty muddy". He indicated the charges may be dropped if everyone leaves the Patch.

Both Langa and Kohne said they hold no grudge against Joseph for his statement to the press.

"You have to make allowances for David. That poor guy's really under pressure here." Langa said. 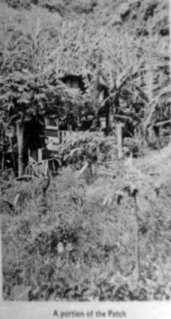 Since none of the officials could or would talk, a trip to the Patch to talk to those most involved seemed in order.

I soon discovered that others were keeping an eye on the place as well.

The Patch is about five miles from Haiku, about a mile down the road from the Maui Zendo and just below the Peahi Chapel. The dirt approach road ends at a bluff top which overlooks the lush green valley that is the Patch.

As I arrived at the entrance, three men came down the road, dressed in sportsclothes. Carrying cameras. With telephoto lenses.

It was Sgt. Hisao Ikioka of the Wailuku Vice Squad and two other policemen.

"And what are you fellows doing here today?" I asked. "Are you going down into the Patch?"

"No. We're just keeping an eye on things," he replied. "We can't go down because of the sign."

At the entrance to the road leading down into the valley is a sign which reads, "no trespassing, no cameras or weapons". I found out later it had been erected two weeks before to keep the police out.

Just then up the path from the Patch comes a longhair. And I am invited down for a tour which lasts several hours and covers one end of the valley to the other. And into the houses scattered across the floor and up both sides of this pocket of paradise.

The inhabitants, 51 at last count, are friendly. And articulate and creative.

Some of the shacks, 26 in all, are veritable works of art. One in particular houses a fireplace of which most sculptors would be proud. Several of the dwellings are two-storied, and reminiscent of pioneer cabins.

The general consensus seemed to be that the failure of the Patch is a result of "too much publicity - it's known all over the world. Even though it's happening all over the island -- people do their own trip and nobody bothers them."

One person felt "they (apparently the entire Maui County government) are trying to stop transients on Maui. They consider us in a state of open revolution. There are two pressure points, Makena and here -- cut them off and it's going to get weird. I hope they are not trying to force an incident.”

The Patch residents said they all are willing to move out. They were given to understand that such an action would, in some fashion, release Joseph from the many violation charges.

They complained, however, that they had seen nothing in writing. They felt this to be a sign of something underhanded going on.

Reactions varied to the question, “where will you go from here?” One couple said they bought land near Ulupalakua. Several persons indicated they would rather not talk about it. They said they would just pick up and leave and take it from there.