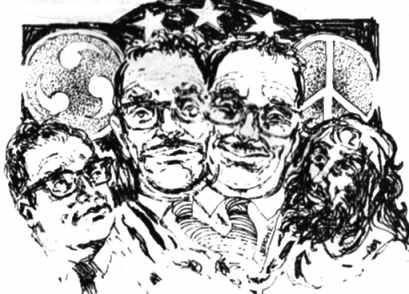 Maui Mayor Elmer Cravalho is the man in the middle of the rubarb about longhairs. As an intelligent politician, Elmer Cravalho knows that if he is "soft on hippies", the hippie haters will hate him too. If he is harsh, then the more benighted elements will feel justified in vigilantism.

The present level of violence against longhairs gives Maui a bad reputation. Not as bad, perhaps, as the Big Island or Kauai, but bad enough. If it gets worse, perhaps we won't have as many tourists.

People who have seen rushes of the forthcoming Jimi Hendrix movie, "Rainbow Bridge", filmed partly on Maui, report that one sequence accidently caught a couple being abused by "Primo Warriors", the girl raped and the boy beaten and forced to guzzle beer.

It won't take many adverse revelations of this kind to turn our precious tourists away. Elmer Cravalho is surely aware of this, and knows better than to refer to the long-hairs as sub-human, or as a "pollution of the soul", as others have done. At the same time, he cannot hold himself aloof and permit the situation to deteriorate.

In this delicate predicament, Mayor Cravalho is considering the prosal for a Youth Contact Center at or near Kahului Airport. As approved by the ad-hoc committee brought together by Tim Head and Al Sparks, this proposal seeks to help young visitors to find their way and learn the rules.

It will take much more that a Youth Contact Center to calm the waters. But it is a good place to begin. Some of the long-hairs are naive or confused. We need to place knowledgeable young people where they can advise newcombers what laws and what mores will affect them. Ordinary students and other straight young people would also benefit.

Beyond this first step, we need a free clinic, because the illness of one class can become the illness of all, if treatment is not easily available. In this matter, Mayor Elmer Cravalho would be reduced to using influence, rather than authority, for the Dept. of Health is a State agency. Perhaps he could point out that if the Department used as much energy in treatment as they do in attempting to legalize punitive guarantines, then our general health service would improve.

We also need to take advantage of Councilman Bulgo's "put up or shut up" ultimatum. Maui could use a WPA-type program. Our unimployment is generally higher than the national average. Like so many other sterotypes about the hippies, the idea that they don't want work is not generally true. Many are anxious for work, for they are broke and need money for the most basic necessities.

Here again, an WPA-program would benefit the entire community, both through the employeement of needy people, hip or straight, and through the development of public works which all could use.

The Mayor has his work cut out for him, and I for one do not presume to tell him how it should be done. Perhaps none of the ideas above are workable or appropriate. What must be done, however, is clear. We must contribute to the organization of our community, not to its disorganization. We must communicate with one another, not hurl epithets. We must ease the hatreds. We must cultivate understanding.