The Banana Patch counter-culture on Maui, Hawaii-some 80 persons- which has been flourishing within the organic, biodegradable valley - is leaving.

After five years in the communal valley, the longhaired residents, up to their beads in rhetoric and accusations after two years of court battles, will now be "doing their thing" elsewhere.

Why the sudden move to greener grasses?

David Joseph - Banana Patch owner, patron of the underground, and dartboard of the establishment, has sold the Patch.

Faced with what he estimates as $15,000 in fines and two years in jail on 28 violations of building codes, land use laws and health regulations, Joseph felt it was time to sell.

Joseph said he had two other firm offers for the banana patch, but Lowenthal's was the best. Joseph said he was satisfied with the transaction.

Nevertheless, he described the closing of the Banana Patch as "an insane disgrace of political power on the part of the Mayor" and "a blow to freedom" which would "do more harm than good".

"The County doesn't like what I'm doing", said Joseph, who has allowed all comers to live on his land and build their dwellings according to personal taste.

"In the beginning", he said; "the Mayor attacked me with 28 charges plus a quarantine on the Banana Patch, and struck me with an injunction".

With constant court battles since June, 1969, and personal appearances in court "about four times", Joseph estimates it has-"cost Maui County $100,000 easy" to prosecute the case.

Maui County spokesmen declined to speculate on the costs.

Joseph's defense, by attorney Sanford Langa of Wailuku, has been handled without charge. However, Joseph said, "I've given my lawyers about $600 which I received as contributions from all over the world - from people I never heard of."

Joseph expressed concern over where "his children", who for the most part are voluntarily lacking in "material possessions" and money would live.

He said, however, he felt that Lowenthal - who gave the Patch dwellers 10 days notice to move - would do what he could to offer assistance.

Slipping into what he describes as his "newspaper consciousness", Lowenthal said he was "doing everything that I can to find housing or financial assistance" for the uprooted.

Lowenthal said one of the three women with children who have been living in the valley has found a house. One is seeking housing and the third has not been asked to leave because there is a question as to whose property she is living on.

Lowenthal said he was sending welfare advocates to talk to any persons with problema arising from the relocation. 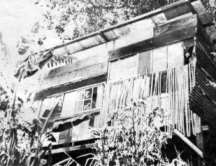 He said the 25 shacks in the banana patch that are in violation of County regulations would be taken down and trees planted in their stead.

On Oct. 17, Lowenthal moved his family into Joseph's old house situated in the middle of the valley - the only structure which passes the regulations.

He said he has no plans for communal living.

Joseph, at 65, looking somehow like a mixture of Joe Bulgo and Pablo Picasso, says he "would like to fight for another 10 years."

"The County", he said, "should stop pushing people around. If you can't help - don't condemn".

"Adults who are in a position to help should help their children. More people need more land. If shared, we would have a better world.

"I bought the land in 1950 from my father-in-law. It was a very lonesome spot. After 14 years these children came. They were peaceful and wanted no violence, were vegetarians and liked to live alone, exploring the world.

"I talked to them and they were very good children. I invited them to the Patch and told them you must build a roof over your heads."

During the next five years, "I met about 2,000 people in and out. I now have friends all over the world.

"You know, there is a beginning and an end to everything. Perhaps there will be a second Patch."

With your name on the "Alert" list-you can strike while the iron is hot. Even though you don't know how long it takes to heat up!

So please confirm your participation in our Thank You E-mail.

After leaving the Banana Patch, David Joseph went to live in Kokomo, Maui near Makawao. His Hawaiian wife Hanamaikai, from Hana, had a stroke and passed away. Joseph was living with one of his two adopted sons, David Jr.

Joseph also passed away on July 6, 1981. His son then sold the place. There was never a second Banana Patch.

Ynez Reyes, also adopted by Mr. and Mrs. Joseph, hanai style ("just for the love of it, not legally") describes Joseph as "a Portugues man from the big island of Hawaii. He had been a bootlegger during the depression, and had a very colorful personality. He loved to build shacks and let people live in them for free."

She said the couple "gave me their Aloha (loving kindness), Kokua (helpfulness without personal gain) and taught me to have Mahalo (gratitude)."

Ynez added, "I found out from Mr. and Mrs. Joseph that human beings can create a lovely society that respects the rights of others and contributes to the safety and well-being of all citizens."

"But it all comes from being loved by others, and appreciated for the individuals that we are."