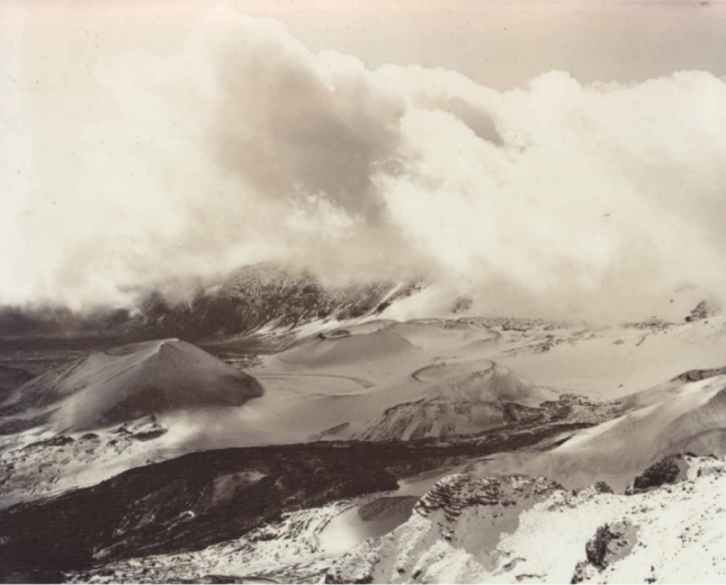 I worked at Haleakala National Park for some months before becoming a reporter. This is at the top of the 10,023 foot volcano which comprises about 3/4 of the island of Maui, Hawaii. The rest of the island was formed by a second volcano-which is about half as high. Between the two is a valley-giving rise to the name of The Valley Isle.

Fortunately, for the sake of this job, my father taught me to ride horses and shoot. Unfortunately, when it came time to change lightbulbs or do carpentry, he taught me to call the manager.

Here we were the "managers" or park caretakers. Two old Hawaiian cowboys-who knew every plant and animal-were in charge of myself and two other helpers-teaching us all the skills we never wanted to know. 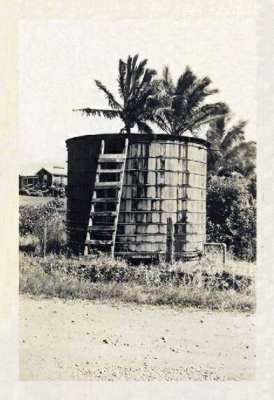 We were all pretty useless at the top of high wooden water towers trying to hammer boards back into place. Then came uplifting days of hauling hunks of rock and lava to line trails. Best of all was destroying a perfectly good pair of shoes in ten minutes flat. This was Road Repair-hot oil and tar. Great fun.

But-and this is a big but-at least all of this was performed with interesting people in one of the world's great settings. At the top of Haleakala park, the clouds would be racing below you. Farther down, you're among them. At the bottom, they're racing overhead.

At times-and in certain spots-all of Maui lies at your feet. And you can look at neighboring Hawaiian islands as well.

The climate changes with the altitude-as does the plantlife. Most of the plants, animals and insects are unique. Perhaps 90 to 95%. Studying them is absolute heaven to many phd's.

Hawaiian sunrises and sunsets are a chapter apart. And we haven't even mentioned the stars on Maui. Or the Haleakala observatories at so-called Science City-not open to the public. I worked there as well. Hired gun. If you read what I write about it-I have to kill you. Just following orders. Nothing personal.

From the 10,000 foot summit of Haleakala, there drops a crater down to 7,000 feet. The walls of this crater are covered with goats. Unfortunately-with no natural enemies-these rather nice creatures-are overgrazing. Eating most of the endangered plant life.

So part of the job was goat hunting. Park employees being the only ones to do so. Now, when it comes to killing, we do our work on water, which is non-potable in the great depression. So we had to call up the water carrier, known to the locals as Gunda Din.

But, since Gunga Din'nt answer, like a good old boat we took in water. A lot of other stuff as well-like firewood and propane for stoves.

Actually, there are three wilderness cabins in the Haleakala crater, along with a ranger cabin for us. Ours is way back, in one of the wettest areas on earth. While we may be drowning, the three public cabins may suffer drought. That is, when it isn't snowing. Which may be waist-high at the summit.

To provision the Holua, Kapalaoa and Paliku cabins-the five of us traversed the steep, often cliff-like walls on horseback with a mule train. And received extra pay to spend the night.

A simular experience may be had today on Maui-without the mules-just the horses-for about $100 a day.

After the mule train preparation, the incredible descent, restocking and looking after the cabins, came the goat hunt. Then, at night, in the ranger cabin, came lessons in skinning, butchering and marinading.

This consisted basically of filling a large round plastic basin with meat-rubbing it with salt and silvering pockets in the meat for cloves of garlic, plus crushed garlic, then black pepper, sliced onions (Maui onions are sweet and famous), a gallon of red wine, vinegar and then every spice at hand. I seem to remember ginger and curry, cumin, bay leaves, cinnamon, sugar, chilies and more.

If you were staying in one place, not our option, the goat could marinate for two or three days-instead of one night.

But, I'm sure you old goats have your own receipes-so let's move on to some old Haleakala news stories. From Maui, Hawaii.

Sign Up Now! Why? Time-Sensitive Discount Vacations and Cruises! That's why!

I've been offered some-and now I'm trying to get the same for you. But neither of us know when these Discount Vacations may come through. So sign up now and be covered!

Get the latest old and new news from Maui! If you enjoy reading this site-sign up here and you'll get more!

Surprises!!! Everyone likes nice surprises! When I can-I'll surprise you! When you least expect it!

We all hate spam! Don't worry! 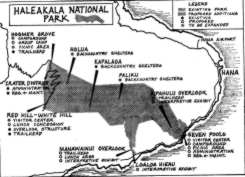 A proposal to designate almost 18,000 acres of Maui's Haleakala National Park as "wilderness area" will be discussed at a public hearing on the island in December.

The National Park Service had scheduled the Maui hearing for 1 p.m., Dec. 14 in the Kahului Library conference room. The hearing is scheduled to run until 5 p.m. and to reconvene, if necessary, at 7 p.m.

A public meeting to review a proposed master plan for the park is to be held on Dec. 13 from 1 p.m. to 5 p.m. at the Kahului Library, according to Russell Cahill (photo), park superintendent. This session also will continue at 7 p.m. if necessary.

The proposal by the park service to designate 17,750 acres within the park as "wilderness area" is designed to keep the area in a natural, undeveloped state. Principal areas included in the proposal are the Haleakala Crater itself and Kipahulu Valley, which leads from the eastern edge of the crater down to the ocean at the Seven Sacred Pools near Hana.

Federal regulations prohibit use of wilderness areas for mining, water development, grazing, timber harvesting, hunting, public roads or utility lines. Only the most minimal improvements, such as trails, are permitted.

Specifically excluded from the proposed wilderness area are the three overnight cabin facilities within the crater at Holua, Paliku and Kapaloa.

Upper Kipahulu Valley, which was donated to the federal government by the Nature Conservancy, will be the most protected area in the park. The valley includes a dense rain forest, a wide variety of Hawaiian plant communities and rare examples of native birds.

Within upper Kipahulu Valley, no permanent camps, trails or other installations will be permitted. Only scientists with written permission will be allowed into the area.

The master plan features improvements both for day visitors who stay only an hour or so, and for persons who hike into the crater for a day or more.

Plans call for replacement of the present visitor center on the west rim with a larger facility with displays and a food concession. A building to house exhibits and park offices is proposed at the Seven Sacred Pools.

The plan also recommends acquisition of Manawainui Valley. New overnight cabins for hikers are proposed within the crater at Paliku and Holua.

Yes, Haleakala Park and its dormant volcano are still one of the main attractions on Maui. Besides, we now have more and more youngsters concerned about preserving natural Maui resources and traditions. The natural beauty of a sunrise, for instance, deserves a special ceremony.