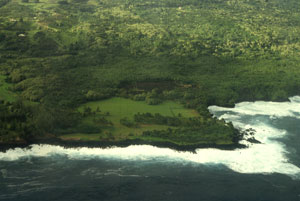 Many people have been hard at work digging up Maui's past in the last 40 years and much new knowledge has been gained.

One of these people is Professor Michael Kolb, an anthropologist from Northern Illinois University.

The ancient temple system on the Hawaiian island of Maui was built over the course of at least 500 years, with cycles of construction peaking in periods of political tension, a new study finds.

The study, the most detailed of its kind to date, will be published in a forthcoming issue of Current Anthropology.

Anthropologist Michael Kolb (below) of Northern Illinois University collected and conducted radiocarbon dating on 90 samples from the ruins of 40 temples, including several smaller temples that were newly discovered. The radiocarbon dates indicate the earliest temples were built in the 13th century, with construction continuing into the early 19th century. 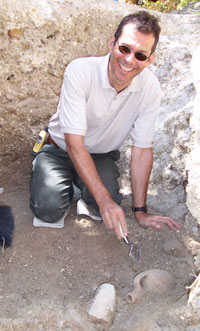 Kolb’s study also identifies four periods of peak construction that correlate with important social and political trends discussed in the oral histories of Hawaii, including changing land-tenure practices, warfare and island consolidation. His findings contradict research in recent years that indicated Maui’s temples, also known as heiau, were built within a span of decades near the turn of the 17th century (A.D. 1600).

“This research provides conclusive evidence that the Maui temple network grew and expanded over a period at least five centuries,” said Kolb, who spent a dozen years locating and excavating temple sites across the island and collecting samples for radiocarbon dating.

“The late 1500s and early 1600s do represent a key phase of construction,” he added. “But a significant number of radiocarbon dates shows that some temples were constructed much earlier. Thirteen temples located in five different areas were built or modified during the 14th century, while seven temples were constructed as early as the 13th century. It’s clear that the temple system evolved as part of a long trajectory of social and political change that also saw a shift from ancestral to sacrificial worship.” 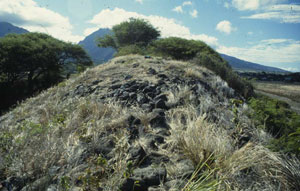 Kolb’s radiocarbon dating identified the ruins of Pihana temple (right), located in Halekii-Pihana State Park, as being the oldest known temple site on Maui. The median radiocarbon date from the temple places its construction at about A.D.1214, although the temple was renovated at least seven times thereafter.

The well-known Pi’ilanihale temple (illustration below), the largest and among the most well-preserved ancient temples on Maui, also is among the oldest, according to Kolb’s findings. Its median radiocarbon date places construction at about A.D. 1294. Pi’ilanihale also was remodeled at least twice thereafter.

Polynesians discovered and began to inhabit the Hawaiian Islands as early as A.D. 300, but the first western contact wasn’t made until 1778, with the arrival of British explorer Captain James Cook.

Because the islands are relatively isolated from the rest of the world, the development of monumental architecture and complex society in Hawaii is of keen interest to archaeologists. Most of what is known about Hawaiian civilization prior to European contact was handed down through oral histories, recorded in the 19th and 20th centuries. Issues surrounding the origins, chronology and pace of temple building have long been debated.

Working with students from NIU and other universities, Kolb excavated portions of the sites and gathered charcoal from beneath the basalt (cooled lava) foundations for dating.

“The Hawaiian civilization lacked ceramics, which is typically why radiocarbon dating is relied upon by scientists,” Kolb said. “Before a temple was built, the land would be set ablaze to clear it from vegetation, leaving behind charcoal remains. We also were able to gather samples for dating from the sites of ancient ovens and bonfires.” 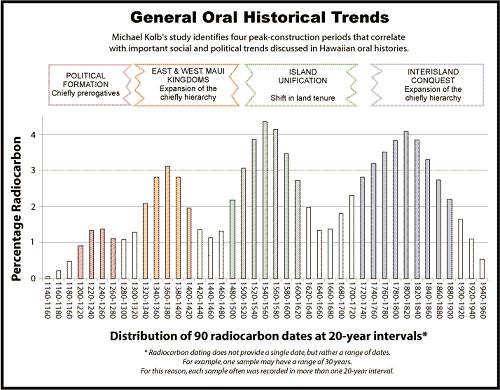 The ancient people of Maui stacked lava rocks to form the foundation of the platform temples, often built on the faces of cliffs or other high points on the island. Small household temples were the size of a room, while large temples, such as Pi’ilanihale, covered more area than a football field and stood 40 feet in height.

“The early monuments were typically open-aired temples for community ancestral worship,” Kolb said. “In the mid-1400s, we begin to see a change in construction style that is reflective of social and political changes. Oftentimes, in a show of economic might, a conquering chief would remodel, build additions to and rededicate a rival’s temples. Many of the early structures were modified or new ones were built with enclosures on top. Access was limited to reward loyal constituents, and sacrificial worship became more of the focus.”

In the early 1800s, when King Kamehameha the Great united the Hawaiian Islands, he remodeled and rededicated all of the major temples. In all, about 250 temples stood on Maui. Most were abandoned or destroyed after Christianity was introduced in 1820.

Today there are about 120 known temple sites on the island, where the ancient foundations and/or other remnants can still be found, Kolb said. 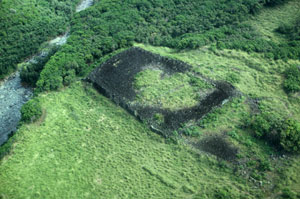 “ Temple ruins are found on all the Hawaiian Islands, but Maui has some of the best preserved sites,” Kolb added. “So I was able to study the entire Maui kingdom and gather a geographically diverse sample with many radiocarbon dates for both small and large temples.”

He sees common threads between the development of civilization in Hawaii and other parts of the world.

“In many ways, Maui represents an excellent test case for state development,” Kolb said. “Its monumental architecture is directly linked to economic, political and ritual development, not unlike the most famous early civilizations, such as the Maya or ancient Egyptians.” All pictures and illustrations were from NIU site. If you want to know more about Dr Kolb's work and Maui Temples see the links below: