Don wrote several stories, then took a break. No one cared. The most anyone would say was no they didn't want more cars in Lahaina. That would be the answer to a direct question and everything ended there. Don was flabbergasted. I was surprised. 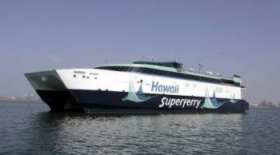 The State Transportation Dept. is studying the area between Lahaina and Kihei for a landing site for the inter-island ferry proposed by John Hulten.

John Hulten Jr., an official with the organization planning the ferry system, told West Maui businessmen last week that the Transportation Dept. has $200,000 to use for the study.

In a talk to the West Maui Business Assn., Hulten indicated that Lahaina itself was not a prime contender as a landing site for the Maui ferry because residents attending a public hearing last year in Lahaina said they did not want the ferry near the town.

However, the business association voted last month to write to Fujio Matsuda, state transportation director, expressing its interest in the ferry system. The association indicated it would be interested in having the Maui ferry dock at Lahaina if questions of traffic congestion and shoreside facilities could be resolved.

Hulten said his company would favor a Lahaina facility if it was agreeable to the people of the town.

The Hulten Ferry Investment Corp. currently is offering stock in the ferry system to the public. Hulten said it appears the corporation will be able to meet its minimum sale of $1.5 million in stock to Hawaii residents.

Federal tax exemptions would permit the company to put most of its revenue into payment of loans and construction of more ships, he said.

Eventually, the system should include about six ships, each of which would be almost as large as the former Matson liner, Lurine. Each vessel could carry 1400 passengers and 300 vehicles.

He said large ships would be used to meet the demands of peak travel periods. Docking facilities could be minimal, because the ferry would carry only passengers and drive-on vehicles, but no seperate freight.

The ferry would not be a freight mover, although companies could ship commercial vehicles loaded with freight. The companies would pay only for the size, not the weight, of the vehicle, with the practical effect that freight costs would be well under those now charged by the Young Bros. interisland barge. 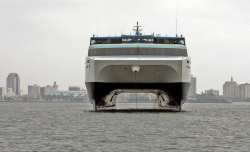 According to Hulten, the State Public Utilities Commission has granted his firm a certificate to operate the system. Dillingham Corp.'s more modest ferry proposal has not yet been acted upon by the PUC, he said, and the Kentron Corp. has not yet applied for permission to operate its proposed interisland hydrofoil vessels.

Hulten said the first ferry could be in service within 18 months of the time a construction contract is let. The State will provide docking facilities on Oahu, Kauai, the Big Island and Maui, and the ferry system will repay cost of the facilities through lease charges paid to the state.

He said the ferry system, with interisland passenger rates of around $9, should stimulate movement of many persons who normally do not travel. Because the ferry would be encouraging more travel in general, he said the system might even help the business of Hawaiian and Aloha Airlines.

The company expects about two thirds of its business to come from Hawaii residents and about one third from tourists.