MAUI HIGH SCHOOL In 1913 a two-story wooden school-Maui High School- was built in the cane fields of Hawaii above Paia.

From Hamakuapoko, the students arrived on foot. From Makawao and Upper Paia, they came by buggy and horseback. From Wailuku and Kahului, from Pauwela and Haiku, they arrived by train.

When the cane fires leaped overhead, the train windows were closed to keep out the black "snow".

The school-our Maui High School- was known as Maui High and Grammar School. In 1914 the first high school students-five in all-graduated from the two-year course.

By 1920 the high school course was four years. A staff of nine put the scholars through their academic paces. The elementary keikis numbered 207.

In the fall of '26, educational mitosis struck and there came a parting of the ways. The grammar school division detached from the high school and migrated to Spreckelsville as Maui Standard School (known today as Kaunoa School).

That same fall, the Maui High School enrollment stood at 417. Steadily, for the most part, the registration rose, to peak at 1,090 during the '37-'38 school year.

With construction of Baldwin High at Wailuku, enrollment slipped. Today there are 760 students, and 17 buildings.

Now it appears the pastoral setting will be vacated over the Chrismas holidays and the school will be reopened on a new campus at 660 Lono Ave. in Kahului Jan. 3. 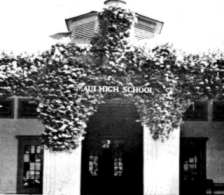 Calvin Yamamoto, Maui High School Principal, said the moving decision was made in 1963.

At that time, he said, the Dept. of Education projected a fall in the number of students. The department had no way of foreseeing the largescale developments now underway in Pukalani and Kula.

Believing the growth would occure in the Wailuku and Kahului areas, the decision was made to provide funding for modern facilities in that area.

Eight buildings have been constructed, including one of the largest school libraries in the state. The structure houses a closed circuit television studio wired throughout the school. Also within the wall-to-wall carpeted building is a darkroom, media center and 70 study cubicles. The library will open with about 500 books.

The cafeteria, designed to serve and seat 2,000 persons, will probably open with 500 seats. It will double as an auditorium.

Also complete is an agricultural lab designed for 183 students.

Shortly up for bidding should be a social studies center, lecture hall, art and business center, home economics center and auditorium.

A basketball court and large blacktop area already is completed. 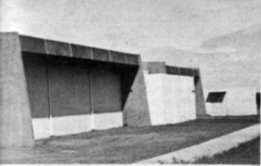 But all is not sweetness and light-even in Hawaii. To some, the site is Pandora's Box.

And an incomplete box at that.

They ask if the opening must come-as it certainly will-why can't the lid be put on first?

Complaints revolve around the possibility of doubling up of classes, the "unesthetic" appearance of the new buildings, incomplete furnishings, the close proximity to Kahului Elementary School with possible bussing congestion, the flat, hot and dusty location, and, in particular, the present lack of gym and auditorium.

Why not wait to move, they ask, until the new school is complete?

Principal Yamamoto says the Dept. of Education apparently feels the new facilities should be put to use rather than lie fallow. He feels most of the objections are not well-founded. "The move will be good,"he said, and the minor problems will be solved.

Yamamoto said the old Maui High buildings probably well be used for an extension of the Makawao School and might also be used to house visiting teachers and scientists who come to study the island.