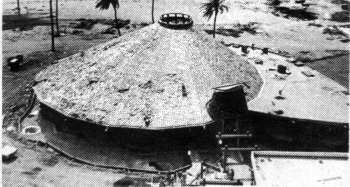 Carpenters, masons, plasterers, carpet layers, paving crews, cleaning ladies and a dozen other types of workers were busy late last week putting a thousand and one finishing touches on the 354-room building.

Every one of those 354 rooms is scheduled to be ready for guests on Monday. Also to be open on Monday, is a seperate round structure which houses the hotel's Quee Queg restaurant and Pequod Bar.

The big building, built in the shape of a very elongated 's', is situated on 12 acres of oceanfront property at the southern end of Kaanapali, less that four miles from Lahaina.

The $10 million building has been under construction since May 1970. Prime contractors on the hotel, designed by Sam Chang Architect & Associates of Honolulu, were Pacific Construction Co., Ltd., and R.M. Takeyama, Inc., both of Honolulu.

The hotel also includes a ballroom that will be able to handle up to 600 persons for meetings and 450 for banquets.

The Pequod Bar is the most singular attraction of the new hotel, featuring the bow, figurehead and deck area of a sailing ship as part of its interior. Guests will sit at tables on the deck of this landbound "ship", and look outside at two small whaleboats mounted on davits above a moat.

Although guests will be received at the hotel beginning Monday, grand opening ceremonies are not scheduled to be held until sometime in September.