According to the Dept. of Planning and Economic Development, $14,072 has been released for drainage improvements at Kauaula Stream on Honoapiillani Hwy. at the south end of Lahaina.

Another $20,000 has been released to draw up plans for a half-million-gallon tank for the Lahaina water system.

More than 600 persons a day visited Haleakala National Park last month, bringing the total of visitors this year to 194,387.

Of the 18,155 visitors in September, 1,176 camped overnight, including 183 in the crater cabins. The figures were released by Park Ranger Lawrence R. Guth.

A petition asking construction of a private hospital for West Maui is to be available for signing at the Lahaina Shopping Center beginning this Friday (Oct. 15).

The petition is being sponsored by the Lahaina Business and Professional Women's Club.

The petition will be addressed to the State Health Dept., asking its approval of a Certificate of Need for two Oregon hospital administrators who wish to build a private hospital in the Lahaina area. The certificate, certifying the need for a hospital in the area, is required before the men can proceed with plans for the facility. 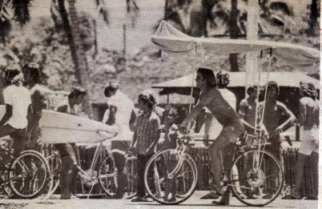 A law that would prohibit surfboard racks on bicycles has received initial approval from the County Council and been referred to the Council's public works committee.

A number of surfers on Maui have attached metal poles and racks to their bicycles to permit them to carry their boards. A letter from Maui Mayor Elmer Cravalho termed the practice "unsafe".

The ordinance must receive one more vote of approval from the Council before it becomes law.

The Maui County Police Women's Auxiliary will host a Family Day potluck picnic for all police families at Kalama Park in Kihei on Monday, Oct. 25.

Janet Makua and Ida Kahoalii are co-chairing the event, which will give special recognition to the wives of police recuits and retirees.

Students and teachers at Sacred Hearts School in Lahaina will present a Aloha Week program of song and dance this Friday (Oct. 15) from 12:30 - 1:30 p.m. on the school grounds.

The public is invited to the program. There is no admission charge.

Five Air Force jet fighters will be in the skies over Kahului Sunday (Oct. 17).

The jets are part of the Air Force's Thunderbirds aerial demonstration team and will put on an air show to help celebrate Aloha Week.

The F-4E Phantom IIs will soar and dive over Kahului Airport, winding up a three-day visit to Hawaii. The specific time of the aerial program was not announced.

In an attempt to lessen the pollution of Maui's air, four County vehicles have been converted to use liquid propane gas.

The conversion was made with the help of the Isle Gas Co. at no cost to the County. The trail program was initiated over a month ago at the urging of Maui Mayor Elmer Cravalho.

If the trial program is successful, it could lead to conversion of all County vehicles.

The use of propane gas is said to reduce exhaust emissions as much as 70 per cent.

Canada and the American Southwest appear to be major new markets for tourism to Hawaii, according to Tim Mitchell, director of the Lahaina Restoration Foundation.

Mitchell returned recently from a one-month visit to the U.S. west coast and Canada, where he told travel agents and tourist industry officials about Maui.

As part of his presentation, Mitchell distributed press kits on Lahaina and the Kaanapali resort area. Brief Maui News

Kam Kiang, a Maui resident since about 1915 and a former owner of Lahaina's Hop Wo Store, died Aug.31 at Maui Memorial Hospital at the age of 75.

Kam Kiang came to Maui from Canton and began work in the Hop Wo Store established by his father and several others. He eventually became owner of the store. The store at 728 Front St. is now operated by his son, Richard, and daughter, Carolyn.

Burial was in the Lahaina Chinese Cemetery.