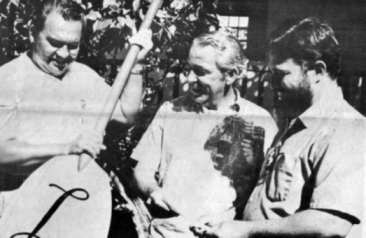 The new recreational entity has placed an order for two 40-foot boats. Delivery is expected from builder George Downing of Honolulu by June.

According to an announcement from the club, the two six-man fiberglass outriggers will cost a total of about $4,300.

The purpose, the announcement said, is to "develop community-wide cooperation and participation in a true Hawaiian sport" and to "encourage Lahaina's youth to train and compete in a sport that requires individual stamina, coordination and precision teamwork."

Paoa said the club hopes to organize various age groups for training and competition in paddling. A women's group probably will be included, he said.

The club is one of two such organizations on Maui. Kaai said the club in central Maui has four koa wood outriggers and one fiberglass.

The club indicated it is buying fiberglass models because they are cheaper and easier to maintain. However, Kaai said koa wood outriggers usually win open sea races and the club might eventually buy or build a koa model.

The first two Lahaina outriggers will be named for a Hawaiian king and queen. A boat shed is expected to be built along the shore near Wahikuli State Park north of Lahaina. Alliance Air Conditioning of Lahaina has volunteered help in building a boat trailer.

A club spokesman said ocean conditions between Olowalu and Kaanapali are ideal for training and racing.

The Lahaina canoe club is currently signing up charter members who will contribute $100 each toward the project. An anonymous donor has given $2,000.

Regular memberships at $12 per year and low-cost student memberships will be offered later.