As Bob Dylan says, the times are a-changin'-and so it appears with the Mala Wharf in Lahaina, where an either/or situation exists.

Barring unforeseen events, either Capt. P.A. Lilly of the State Harbors Division will demolish the first two spans of the Mala Wharf or John Metheany, former general manager of the Kula Lodge, will construct a restaurant, museum, shops, offices, park, parking lot and small marina at the site.

According to Lilly he was given the go-ahead by the County government to jack-hammer down the entrance to the Mala Wharf in the interests of public safety. The structure was officially condemned 12 years ago, but remains a favorite of fisherman, sunbathers, kids and photographers.

If Metheany's plans, which now rest with the County Planning Dept. and the State Dept. of Land and Natural Resources are approved, he says construction of the entire complex could be completed 10 months after the end of the current shipping strike.

Metheany said he is negotiating for a 20-year lease from the State of Hawaii.

The matter probably will be brought before the County Planning Commission at 1:30 p.m., Sept. 7, at the County Council chambers, he said.

Metheany said he formed the Xanadu Corp. to construct the development. Attorney for the group is Bill Kohne of Wailuku; the engineer is Al Palmer of Kihei and Los Angeles, and William Wookey of Kihei is the architect.

Initial plans call for a 193-space parking lot situated at the Kaanapali side of the foot of the pier.

A park is planned between the parking lot and the shoreline which would block the parking area from sight while on the pier.

Four buildings, housing 18 shops and 10 offices would be staggered on alternate sides of the pier. Park and fishing areas would be located between the buildings. Some of the shops would be cantilevered over the water.

The bulk of the four buildings would be one story, with two sections of each building rising another story.

Near the end of the pier, a bait and tackle shop is planned.

Plans also call for construction of a one-story Hawaiiana Museum.

Plans also include a 40-ship marina. The marina would be situated close to shore and would require dredging operations. 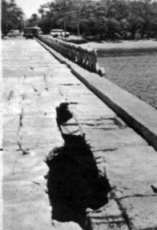 The cost of repairing the pier-which mainly involves replacing the concrete slab, as the base appears to be basically sound-is estimated at $300,000, he said.

In addition, $400,000 is necessary for construction of a six-inch water main from Front St. and $50,000 for installation of a sewer line.

He said he has no price yet on construction of the parking lot and park, or the marina.

Capital for the venture is coming from private sources, he said. According to Metheany, construction could begin as soon as the shipping strike ends.

Metheany said the pier was built by the State (then the territory) in 1921 at a cost of $2 million. Due to the heavy serge, he said, the first ship to use the pier had its side smashed in.

After that, he said, ships anchored offshore and unloaded with the help of smaller boats which traveled back and forth from the pier.

The pier also was used by small pineapple boats, he said.

For a number of years a ferry ran between the wharf and Lanai. The service was discontinued 12 years ago when small planes began to take over the inter island service and the wharf was condemned as structurally unsound.

Call To Action:
Send Your Ships Out-So They May Come In

With your name on the "Alert" list-you're ready to go. Even though you may not know when that will be!

In 1991, hurricane Iniki destroyed the already fragile top structure of Mala Wharf. Nowadays, the site is used for scuba diving, fishing and photography. A boat ramp was added to one side.