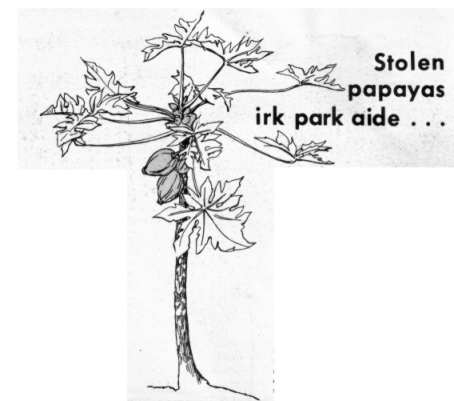 A grove of papaya trees-hacked down at the orders of an irate park caretaker-is now growing back in at Waianapanapa State Park near Hana.

Caretaker Frank Oliveira said he had the trees chopped down in order to prevent persons from stealing the fruit and disturbing guests in the nearby park cabins.

Souza, in a letter to a Lahaina woman, said he was "appalled at the action taken by the park caretaker . . . .

"Please be assured that such practices are not condoned by the Division of State Parks," he said.

In a letter to the Parks Division, the woman had complained of visiting the park last fall and finding "what we thought to be the work of vandals-literally dozens of papaya trees hacked down . . .

"Needless to say, we were appalled. When we inquired at the caretaker's cabin as to how this desecration could have happened in a supervised area, we were aghast at the answer. We were informed (with a grin) that they had cut down the trees '... because the hippies have been eating the fruit'."

Oliveira said a group of persons from Hana had been coming to the park frequently and taking papayas from the park and bananas from neighboring private property. The persons also had been disturbing guests at the park cabins, he said.

During this period, he said, a number of articles had disappeared from the cabins.

He said he felt it was his duty to take some action, so he ordered destruction of the trees.

Oliveira said the trees are now growing back in and should be bearing fruit again soon.