A massive Maui Electric generation plant capable of supplying the power needs of the entire island of Maui may be built in the future at a site near Maalaea.

Maui Electric Co. has applied for a special permit for construction of a power plant on property near the northern end of Kealia Pond.

The company plans to immediately install a small diesel generator at the site, if it receives approval of the Maui County Planning Commission and the State Land Use Commission.

However, tentative long-range plans envision construction of a huge steam generator plant with five times the power output of the company's only existing power plant, located at Kahului.

The eventual power plant building could stand as high as 70 feet and cover an area up to four acres.

Proposed site for the building is in the midst of a large State Agricultural District, on relatively level land near the ocean. No other large buildings or industrial uses are planned for the general area. 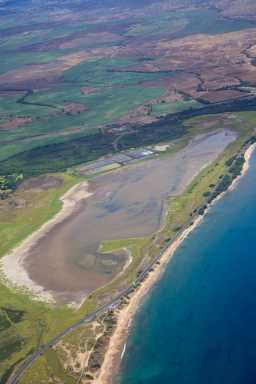 Kealia Pond in Kihei: photo by Kris Nelson, from Facebook

An announcement said the company "is aware of the ecology of the Maalaea Bay area and will make every effort to design and construct the plant in a manner not to be adverse to the environment."

The Stearns-Roger Corp. of Denver-a consulting firm hired by Maui Electric-said in a lengthy site location report that:

"Objectionable appearance of an industrial area can be made attractive by trees and shrubs. Landscaping can effectively screen objectionable views such as industrial facilities."

The company's application for a special use permit said its proposed location "adjacent to the cane fields and away from any urban development is suited for the electric generation plant with minimum adverse affect to the surrounding lands and environment."

Company officials do not believe construction of a large plant will degrade the appearance of the area. One official referred to the area as "just a mud flat", covered with keawe trees, and not particularly attractive. He said he felt it would not be undesirable to have the plant at the proposed location, where it could be seen for miles around.

Maui Electric has dismissed suggestions that the new plant be built at the base of the nearby West Maui mountains, which might shield or minimize the size of the structure. According to the company, the cost of piping necessary ocean water to such a site would be prohibitive. A large volume of water will be used for cooling purposes.

"Thermal pollution" from heated water being discharged back into the ocean should not be a serious problem. The company also said air pollution will be minimized due to prevailing winds which should carry stack emissions out over the water.

A new power plant is necessary because of an "acute shortage" of electric power, the company said.

The Stearns-Roger report-dated April 1970-cautioned that power demands would equal the capability of the existing system by 1973. It also said the Kahului plant, in 1970, was operating above its maximum capacity.

Maui Electric consultant Robert Ohata, in a letter last month to Maui Planning Director Howard Nakamura, warned of a possible "brown out"-a partial electrical failure due to a lack of enough power generators to meet demand on the island by the end of this year.

According to Maui Electric, the company did not apply for the power plant permit earlier because officials did not realize how fast the power demand was growing. Maui power sales jumped 9.5 per cent in 1969, 13.5 per cent last year, and were growing at the rate of 17 per cent during the first three months of this year.

Power demands are expected to increase with construction of new hotels in west Maui, a new county building, another shopping center in Kahului, large tourists developments at Honolua and Wailea, and other projects.

Maui Electric has had its eye on the Kealia Pond site for at least two years. The Kihei General Plan, adopted by the County in 1969, shows a power plant site near the one finally chosen by Maui Electric.

The Stearns-Roger report essentially confirmed Maui Electric's feelings that the Kealia Pond site was the best for its purposes. Saying it is near the ocean and close to roads, is away from major tsunami danger areas, is in an area where winds will blow stack exhausts out to sea, and is well located for transmission of power throughout Maui.

The consulting firm said it studied potential sites throughout Maui-including the site of the present Kahului plant-and found the Kealia Pond area to be the most desirable single location. The owner of the 30-acre site-Alexander & Baldwin, Inc.-has agreed to sell.

If government approval is received, Maui Electric plans to install a 2,750-kilowatt diesel generator on the site by the end of this year. It would be an emergency unit that would automatically turn on when the Kahalui power plant is overloaded.

The first steam generator unit would not be installed until 1975 or later. A steam unit, capable of generating 25,000 kilowatts, would cost an estimated $9 million.

The report talks of an eventual power plant consisting of eight steam units, with a total generating capacity of 200,000 kilowatts.

The maximum output of the Kahului plant is 40,000 kilowatts. The existing system is augmented with power generated by Pioneer Mill and HC&S, which together can turn out 13,000 kilowatts.