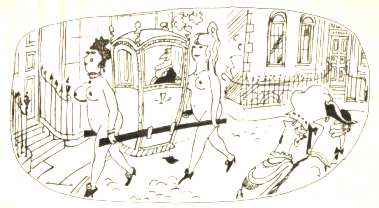 But I thought I'd take a stab at it anyway.

From talks around town-and a look at the July 1971 issue of Playboy-it seems De Renzy is doing okay.

Among the rewards of his unusual labors is the 185-foot ship, the Marysville, anchored last week off Mala Wharf in Lahaina.

The ship may take off for Honolulu soon for repair work, and then Tahiti may be the next port of call.

De Renry paid over $40,000 for the Marysville and has spent another $20,000 fixing her up. Originally an escort-rescue vessel for the Navy, she was last used by the Navy as a research ship.

About half her crew of 18 are women, "all stateside chicks".

One of the crew members is a cameraman, equipped to make "documentaries".

The boat has no fixed schedule and no fixed stops. The general idea, apparently, is to sail around the world and document the cruise.

And to provide rest and relaxation for the over-worked captain.

De Renzy, who is in his mid-thirties, "doesn't smoke or drink, and there is no dope on board for obvious reasons."

According to Playboy, he lives in a 15-room hilltop mansion in San Rafael, Calif., complete with editing and screening rooms.

Born and raised in New England, he attended a prep school in New Hampshire and married after graduation. That marriage fell apart while he was working as an instructor in the Air Force's Survival School in Reno in 1954.

Following his discharge, he worked as a gambling dealer in Nevada, and on the side studied zoology at the University of Nevada.

He then opened his own theater in San Francisco and began stocking it with his own pictures.

Then came Pornography in Denmark and the start of the current "hardcore revolution" in the country -- a revolution that has carried right in to Lahaina's Queen Theatre.

It would appear he is taking his occupation to heart.

When Playboy writer John Bowers went to interview De Renzy in his home, he was introduced to his wife, Katheryn, a former topless dancer.

Then he was introduced to his "second wife", 19-year-old Christine.

Reports Bowers: "Both girls get along fine with each other, and all three sleep in a mammoth bed."

As a crew member put it: "De Renzy believes in letting nature take its course."

With your name on the "Alert" list-you are good to go. Even though you don't know when that may be!

And we have Surprises!!! Everyone likes nice surprises. Especially when least expected!

So please confirm your participation in our e-mail to you.